Well this isn't exactly a realtime blog, but I did need time to catch up and review the images. My laptop seems to have slowed considerably; I can't believe that used to be my main computer. 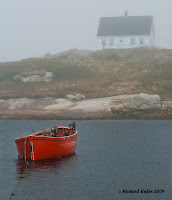 Peggy's Cove wasn't really what I expected. Although it is a real working fishing village, it seemed in some ways to dominated by the tourists. I will know for next time (if there should be another opportunity) that I need to get there at around dawn to photograph the lighthouse without tourists. Nevertheless there were still some opportunities. It did have the typical fog.

Although one of the main reasons for going to Nova Scotia was to photography the fishing villages, I did less of that than I anticipated. Although it was a bit out of the way, "Ovens" a private park with a series of sea caves south of Lunenberg was a real experience, especially when those breakers came pounding into the cave, up over my feet, with a tremendous roar, and enough power to literally shake the walls. This cave narrows to a throat, and when the timing is such that the water coming out meets the water going in, the noise and power are incredible.

Kejimkulik Seaside adjunct, although it required a moderate walk was definitely worth the time, especially if you get there early. The access road also had some very nice possibilities. It was overall very peaceful and calm.

Breton Highlands and the South Coast of NS

I have not been very good about keeping up with this, even worse with the pictures.

We spent 2 days in the Breton Highlands. The Moutainview motel was rather spartan, especially after the Basejour in Moncton, which was relatively nice. However, the Highlands were pretty nice. We stopped for lunch in Judique at a "Celtic Interpretive Center" on the way up. Unfortunately we just caught the very end of the live music, but everyone was friendly. We had a light lunch and drove on. One thing we noticed as we got into the Park area was that gas stations were relatively limited and we had to keep an eye on the gauge because it might be 30 miles or more to the next one.

I actually got up for sunrise and might have gotten some good shots of the warm morning light shining up on to some high clouds. It was pretty cool.

That night we ate at the Artisanal in Cheticamp which advertised Acadian cooking. Martha had a meat pie that she said was tasty, I had the fried haddock which they served with grilled onions and peas and carrots. We each had "blueberry pudding with hot sauce" which was pretty good. It had the consistency of a thick blueberry pancake and was served with a brown caramel sauce that wasn't too sweet. We left pretty stuffed. If we were to come again, we would stay in Cheticamp rather than Pleasant Bay because there is more to do.

It was a long wet ride down to Queensland, just south and west of Halifax. We stayed at the Surfside Inn which is right on the coast. Did a little touring the first day, but didn't take many pictures. Second day we went to Peggys Cove which has a lot of potential and is major tourist draw with 4 or 5 buses coming in while we were there. However, the light was gloomy and overcast and it was crowded.

I did some shooting, but nothing to get excited about.

We ate at the Inn tonight. Good food, very pleasant meal and then could just walk upstairs. Tomorrow we will hit Lunenberg. The following day we start for home and need to be at the ferry in Yarmouth by 3. It will get us to Portland by about 9. We plan to eat on the Ferry. The hotel in Portland in the HoJo's we stayed at earlier. Up early and drive home on Friday. Big concern is hitting NY at the wrong time.

I will post pictures when we get home. The laptop processes them really slowly.
Posted by Rich at 4:39 PM No comments:

Moncton is a really nice small city. Several good restaurants in the City Centre. Today it rained most of the day. We went up to a small mall, sampled a "beavertail" fried dough with a topping on it (I had apples and cinamon, Martha had chocolate and peanut butter). No pictures. Came back from the mall, read and browsed the internet, used the fitness room and had sushi for dinner.
Posted by Rich at 3:56 PM No comments:

Went down to Hopewell, a place where the tide comes up about 50 feet. You can walk "on the sea floor" around "flower pots" that are columns left as softer comglomerate sandstone erodes away.

Martha found a new photographer boyfriend in the visitor center.

Afterward went down to Bay of Fundy National Park. Some pictures may be

downloaded yet.
Posted by Rich at 6:33 PM No comments:

Didn't rush getting out. Stopped at Cobscook Bay State Park, but just walked a little way down a nature trail. Continued on to Moncton. Dinner at the Triangle Pub. Really good chowder an mussels. Added some images to yesterday's blog.
Posted by Rich at 7:38 PM No comments:

Traveled from Portland, through Bangor to Lubec. Stopped at a bog between Bangor and Orono. Lots of pitcher plants, but didn't see any sundews. Very long boardwalk. It is apparently part of Bangor's Forest Park and there were lots of other trails.

Made it Lubec (accent on the second syllable) without too much trouble. Staying at a renovated Coast Guard Station (West Quoddy Station). Not fancy, but roomy, has internet and satellite TV. Less than a mile from Quoddy State Park, which is a pretty neat place with lots of Maine rocky shoreline. Yesterday was gorgeous weather but today (Wed. 9/23) was foggy/drizzly most of the day. I had to wipe the lens after practically every picture. Tomorrow will post an image of the sign noting that this is the easternmost point of the US.

Today we spent a fair amount of time at a bog at Quoddy State Park, climbing coastal trails and drove up to Campobello Island

where Franklin Roosevelt had a summer home. Right after we went through customs, we stopped at the Visitors' Center and they suggested a nearby lighthouse where we saw some seals playing around. They were several hundred yards out, but we could see them quite well with binoculars. They are big!

After that we toured the "cottage" (18 bedrooms - but they are small) and then drove to the north end of the island hoping to see some whales. No luck there and we headed back very tired after a long day.

Ate a a place called Murphy's in Lubec. I ordered a fish chowder that was disappointing - if you can't get a good chowder in Maine, what hope is there?
Posted by Rich at 7:43 PM No comments:

Heading up to Maine, New Brunswick and Nova Scotia for some vacation and photography. Left Maryland at 7:15 am today. Made it to Portland by around 4:30. Dinner was at a pretty funky local place on Commercial Street in downtown Portland called, very creatively, Portland Lobster Bar. Martha liked the "Salt Dog Wild Blueberry Ale." The food was so-so and there were only three choices: salad, fried or fried, but the people were nice. There was a live band and we ate out on a dock, under a tent with heaters so it was comfortable. Lot's of dinner choices in downtown Portland and it is a very walkable area.

Hopefully some pictures tomorrow.
Posted by Rich at 5:41 PM No comments: